Good for you. Good for the planet.

We all know how important nutrition is for our physical health, but did you know that diet also has a major influence on your mental health?

What we eat affects the health of our brain. From early brain development as a baby and young child, right up to later life, when delaying cognitive decline and natural ageing of the brain becomes a priority.

Eating a healthy, balanced diet and optimising your nutrition with the power of plants is one step you can take to keep your brain in good shape.

Read on to find the top 7 vegan foods and nutrients that you should be eating to keep your brain healthy and protect your mental health... 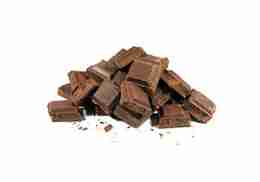 A genuine reason to include more chocolate in your diet? Yes please! Most high cocoa content chocolate is vegan-friendly as it doesn’t contain the milk solids you’d find in white or milk chocolate.

That’s great news for brain health as dark chocolate (or more specifically cocoa) is naturally rich in compounds called ‘flavonoids’, which penetrate and accumulate in the regions of the brain involved in learning and memory.

This not only helps to improve cognitive function, but also to reduce the impact of ageing on the brain and banish brain fog [1]. Can blueberries do anything wrong?! These small but powerful berries are a compact powerhouse of plant-based nutrition.

They’re a great source of antioxidants, particularly anthocyanins, which fight off free radicals (damaging molecules from the environment) to protect the brain from disease and the reduce the effects of ageing on the brain [2].

Studies have found that a high intake of blueberries can help to improve memory, intelligence and cognitive function [3]. 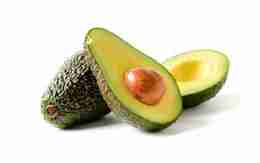 Avocados are synonymous with the vegan diet and have earned their place in the spotlight as a plant-powered superfood!

Specifically to brain health, the high density of healthy monounsaturated fats in avocados helps to promote heart health and in turn increase blood flow to the brain – keeping it naturally fuelled all day long. They also help to protect glial cells found in the nervous system.

You’ll also find brain-boosting vitamins B, C, E and Folate in your humble avocado – which work in synergy to prevent oxidative damage in the brain and help to produce new brain cells.

Folate is also thought to prevent the formation of 'tangles' which contribute to conditions such as Alzheimer's Disease, whilst vitamin K helps to support optimal blood flow to the brain for better performance. 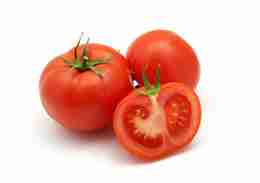 Like all colourful foods, tomatoes are a potent source of plant-based antioxidants. This includes one antioxidant in particular called ‘lycopene.’

Lycopene is a powerful phytonutrient which works within the brain to prevent the cellular damage which occurs in the development of dementia, particularly Alzheimer’s Disease [4].

Carotenoids such as Lycopene also help to protect fat in the body, which is important for brain health, as our brains are made up of 60% fat.

Tip: Cooking your tomatoes win a healthy oil such as avocado or coconut oil will increase absorption of this fat-soluble compound. 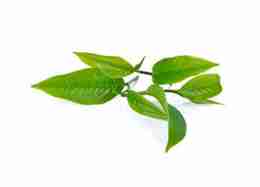 Green tea extract has been shown to activate an area of the brain specific to working memory, which improves performance in memory-based tasks and learning [5].

Green tea contains an amino acid called L-Theanine which is able to cross the blood-brain barrier and increase the production of neurotransmitters such as GABA which can help to reduce the effects of stress and anxiety on the brain.

Green tea is also high in an antioxidant called EGCG, which has been shown to improve mitochondrial function in the brain and protect cells from damage.

It is also thought that the brain-boosting effects of green tea are amplified by promoting blood flow to the brain. 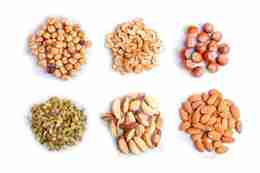 Both nuts and seeds are packed with healthy fats which provide energy for the brain to function and help to replenish individual neurons and brain cells [6].

They are also a really good source of minerals such as zinc, which has been shown to enhance memory, and magnesium which helps the body to manage stress and can have a positive effect on mood [7]. 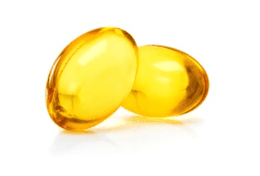 Of all the foods mentioned here, Omega-3 is the most important to include in your diet, because it's probably the hardest to get. This is especially true of DHA, which is the most beneficial Omega-3 fatty acid and makes up 10-15% of the fat in the brain.

DHA is a vital brain food that benefits brain health throughout life. From helping the brain to develop normally in infants, to improving cognition in adults and preventing neurodegenerative disease in later life [10].

Optimal Omega-3 intake has been linked with a whole spectrum of amazing benefits for the mind, including:

DHA is difficult to get in the modern diet. This is especially true if you're vegan or just don't eat much oily fish, as it's not found in fruits and vegetables. Although nuts and seeds do contain some Omega-3, they contain a form called ALA, which doesn't offer any significant benefits for the brain.

Algae is the only plant-based source of omega-3 DHA, but unfortunately, algae isn't the easiest thing to get into your diet!

The good news is, there's a convenient way to get a Omega-3 DHA without needing to eat fish...

Give your brain the food it needs. 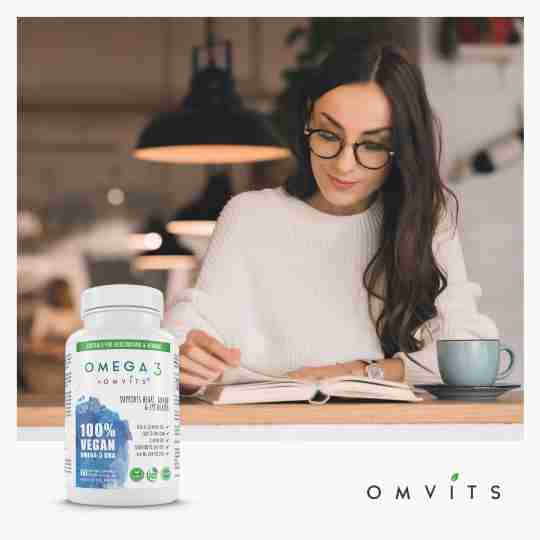 As we enter our mid-30s and early 40s, the brain begins to slowly decline. We find it harder to retain new information, the stresses of life affect our mental health and our memory is not quite as sharp as it used to be.

That's why it's so important to give the brain the nutrients it needs to stay healthy and also help prevent more severe decline later in life.

The human brain is made up of around 60% fat. Omega-3 DHA makes up 10-15% of these fats and 97% of all omega-3 in the brain. That's why it's so important to provide the brain with a steady supply of healthy omega-3 DHA.

Omvits Omega-3 is an 100% vegan algae-based omega-3 supplement, which offers a quick and convenient way to give your body the fatty acids it needs, keeping your mind nourished to take on life's challenges. 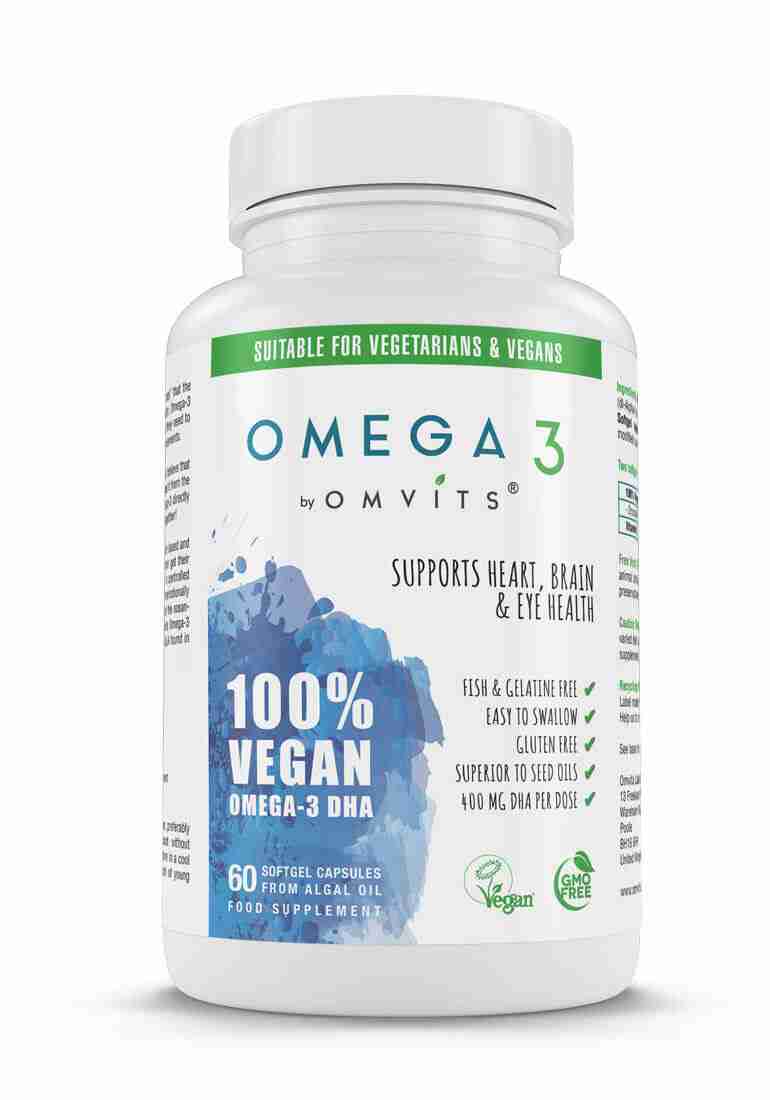 At Omvits, we believe it’s possible for humans to get the best nutrition in a sustainable and cruelty-free way, so we can live happy and healthy lives in harmony with nature.

That's why we've developed Omvits Omega-3 - an Omega-3 DHA supplement made from algae oil rather than fish.

We grow our algae in purified water and extract the clean and nutritious omega-3 directly, leaving the fish in the sea where they belong!﻿

What people are saying about us...

"These vegan omega 3 supplements have been the best thing. I felt so awful before... foggy, couldn’t remember things or focus and concentrate for long. Everything to do with using my brain and thinking felt like such hard work.

I noticed a huge difference just in the first week. I feel so much clearer and better all-round. I can focus on my work for hours, my memory is improved and things don’t feel so difficult.

I am so glad I started taking these supplements. I will be ordering them regularly, there’s no way I would be without them now. The positive impact they have had on my well-being is absolutely worth every penny."

“'I get brain fog now and then so decided to try these. Cod Liver Oil was helping but is unpleasant to say the least.

Since taking Omvits Omega-3, I can think clearly and do my job better. I can even remember details from my childhood that I couldn't before!”

All Omvits products are made for those who care about the environment.

We care about making our products safe and healthy for you—and our planet. That’s why all our products are 100% vegan with no unnecessary packaging.

Where plastic is used, we ensure it's as recyclable as possible and even the labels we use are biodegradable.

We also never test our products on animals.

Want to get exclusive discounts, delicious recipes and other awesome stuff to educate, inspire and make you smile?